Improve Your Odds When You Play Keno

When you play keno you’re up against the highest house edge in the casino, around 25%! Yet, one can while away an hour or two in the Keno lounge at little or no cost. Play the game the right way and you can have a realistic hope of coming out ahead. Let the cocktail waitress bring you some free drinks, relax, and enjoy keno games the frugal way suggested here. Because the house advantage is so high, you should never bet big money when you play keno.

While in a Las Vegas casino restaurant, those keno tickets found on every table make it easy and convenient to place bets on keno while you’re waiting for your food. Here’s how to write Keno tickets that cost very little but give you a much greater chance of actually winning some money when you play.

Played at 50-cents a way the cost is only $1.50 per game. Usually there are about six to eight keno games played per hour. Even if you didn’t win anything at all, your hourly cost would be a maximum of $12. Deduct the value of the free drinks and playing keno becomes the cheapest way to gamble. You can’t get that good a deal playing any other game in the casino. The payoffs vary slightly from casino to casino.

In most places you will collect:

Here’s another way to play Keno frugally. Veteran Las Vegas Keno managers admit that straight three-spot tickets are the least profitable for the casino, because three numbers are relatively easy to hit. In most casinos a three-spot ticket pays $42 for a bet of $1, and you also get your money back if you catch two out of the three numbers you picked.

Choose three lucky numbers and play keno for 21 games at $1 each. If all three of your numbers come up only once in 21 games, you’ve made a profit of at least $21. In other words you’ve doubled your money! Why play keno games 21 times? Because if you play the same ticket at least that many consecutive times you have up to one year to collect your winnings. I buy a ticket like that in the evening, get a good night’s sleep, and let them surprise me in the morning.

Looking for a bigger Keno win

In case you’re hoping to score a much bigger win when you play keno, here are some facts to consider:

Definitely opt for the 8-spot ticket. The chances of hitting 7 out of 8 numbers are considerably better than those of catching 6 out of 6, and you win exactly the same amount. Plus if you play with the 8-spot ticket you have added leverage. If it’s your lucky day, you could hit all 8 numbers and collect $20,000. That possibility doesn’t exist if you play keno with only a 6 spot ticket, since the maximum six-spot payout is $1.500. 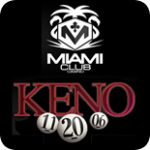